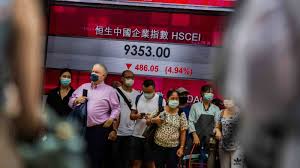 GUANGZHOU, China — Meituan shares surged over 8% on Monday despite the food delivery giant being slapped with a $500 million antitrust fine, as the penalty was not as large as expected.

On Friday, China’s State Administration for Market Regulation (SAMR) said Meituan abused its dominant position in the country’s online food delivery market. The market regulator said Meituan pushed merchants to sign exclusive cooperation agreements with them and carried out punitive measures for those that didn’t.

The SAMR slapped a 3.44 billion yuan ($534.3 million) fine on Meituan and ordered it to carry out rectification measures, concluding a months-long probe.

Meituan closed up more than 8% in Hong Kong trade, while other China technology stocks listed in Hong Kong were also broadly higher. Tencent ended the day higher by 2.9% while Alibaba jumped nearly 8%.

Investment bank Jefferies said the fine has removed an “overhang” on Meituan.

“We believe the SAMR decision addresses market concerns and Meituan (MT) has been communicating with authorities and upgrading its business operations,” the analysts said in a note Sunday.

Separately, Alibaba was slapped with a $2.8 billion fine in April — about 4% of 2019 revenue the e-commerce giant was forced to pay as part of an anti-monopoly investigation.

“Overall the fact that Chinese equity markets are definitely … trading much more attractive relative to most other countries here in Asia,” Eastspring Investments’ Wong said.

“Chinese markets … are trading at substantially lower valuation levels,” he said. “We are seeing investors bottom fishing a bit.”

Wong said that any positive sentiment coming out of China toward the technology sector should lead to “more buying” of the related stocks.

China has been increasing scrutiny on its domestic technology companies over the past year, wiping billions of dollars of value off tech stocks.

Regulators have focused on tightening rules around unfair competition and data protection but have even gone further than other jurisdictions by turning their attention to regulating algorithms.